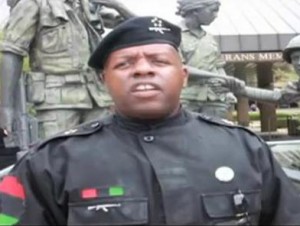 Members of a self-proclaimed “New Black Liberation Militia,” based out of Atlanta, GA, say they plan to attempt a citizen’s arrest of George Zimmerman, the neighborhood watchman who confessed to fatally shooting the unarmed Trayvon Martin in Sanford, Fl last month.

One of the leaders of this group, which is “a multi-faith, spiritual,cultural, scientific, and political instructional institution,” according to its website, is a top student of the late Dr. Khallid Abdul Muhammad, a controversial National Spokesman and Representative of the Nation of Islam.

Najee Muhammad,who calls himself “the national commander and minister of the New Black Liberation Institute and Militia,” was active in protesting the execution of Troy Davis, who was convicted of and executed for the August 19, 1989 murder of police officer Mark MacPhail in Savannah, GA.

What are your thoughts, let's talk about it! Cancel reply